Robert Leroy Johnson is believed to be the father of the genre “ blues music.” He is remembered mostly for his controversial choice in music whose lyrics were centered on dark thoughts and the devil. Robert Johnson may be the first ever rock star and his legend eclipsed only by his skill.

He was born on May 8th, 1911 in hazel Hurst Mississippi. Robert was a young man who loved music And took time off to learn how to play the harmonica which he was good at but he was more drawn to the guitar though his guitar skills were less than stellar and he lived Like many bluesmen who lived in the shadow of Jim Crow. Johnson was a wanderer for most of his adult life and performed in juke joints often traveling with his fellow blues artist Johnny Shines as far as New York City. He married twice first to Virginia Travis, who died while giving birth to their child. He later married Caletta Craft between 1931 to 1938 when she died. He took up guitar at a young age and became a traveling musician, eventually glimpsing the bustle of New York City

Before Robert Johnson became a blues legend he wasn’t always as talented at playing the guitar. One of the earliest accounts of Johnson as a musician comes from Delta blues pioneer Son House, who first encountered the young artist around 1930 in Robinsonville, Mississippi. Robert always hung out at the local juke joints where Son House would play and he always begged the established artists for a chance to play their guitars whenever they went on a break which they agreed to. When Robert would get on stage he was so bad at it that the crowd would tell Son House to stop letting him play but he kept playing anyway until his father would get at him and dogged him so much that he ran away and he disappeared for about six months. 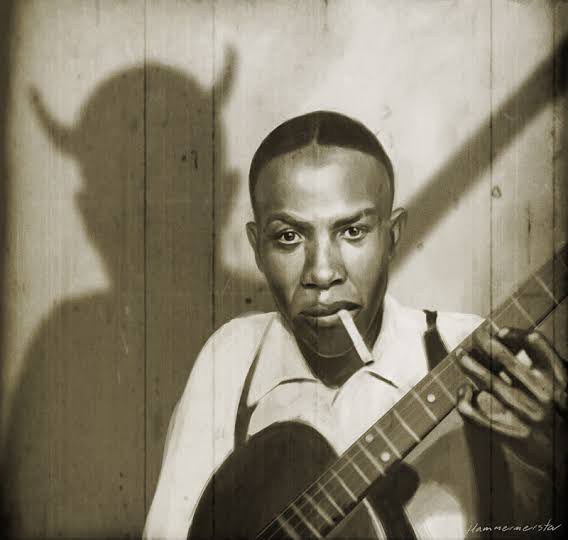 Legend has it that during the time of his disappearance Robert Johnson met the devil at a crossroads and gave him his soul in exchange for mastery of the guitar. Another folk tale suggests that Robert met the devil at a crossroad and the devil revealed himself to Robert took the guitar Robert was holding and tuned it to the” perfect note” hence making Robert the most skilled guitarist after that encounter.

On August 16, 1938, he died in Mississippi, with just over two dozen little-noticed recorded songs to his name. Johnson’s recordings were so unique and he had an extraordinary guitar technique. The artist, who was often associated with Gibson guitars, used his instrument like a second voice. His eclectic style offered a full sound one which prompted Rolling Stones guitarist Keith Richards to declare, “Robert Johnson was like an orchestra all by himself.”

What is known is that Robert died near Greenwood, he was 27 years old. His death remained unreported for 30 years and without a formal autopsy, the public has been left to speculate on the cause of his death adding to the lore that surrounds Johnson.

Through a variety of accounts including those by fellow blues artists David “Honeyboy” Edwards and Sonny Boy Williamson, we know that Johnson spent the last weeks of his life playing regularly at a juke joint attached to The Three Forks Store, just outside of Greenwood. In one version of the story, Johnson flirted with a woman at the party (possibly the wife of the store’s owner) and was poisoned by her jealous husband. He became so sick that he had to be taken into Greenwood, where he perished.

In 1968, Mississippi journalist Gayle Dean Wardlow sought to find out the truth about Johnson’s final days. In addition to unearthing his death certificate, Wardlow discovered that the artist may have been born with congenital syphilis. According to a doctor, it is possible that he had an aneurysm caused by syphilis and his love of drinking moonshine.

Johnson’s legacy and his immense contributions to popular music have been recognized by a broad range of institutions, including the Rock and Roll Hall of Fame, the US Postal Service, the Library of Congress, and the Recording Academy, which bestowed a posthumous Grammy Lifetime Achievement Award upon Johnson in 2006.

Check our website for more stories on black excellence.

This article was written by Thelma Letasi.